Season 4 has finished, with quite a dramatic conclusion.
There were 3 matches left to play, this was the current table heading into those last few games:

Next up was top placed Manchester City, possible title decider in the making, here are condensed highlights of how that match went:

So we lost, 2-1, it was one of the toughest matches I have ever played, City’s pressing and high tempo football was a real challenge to deal with, the scoreline doesn’t tell the whole story though, man of the match was undoubtedly their keeper, Eduardo, some of the saves he pulled off were ridiculous, 3-3 would have probably been a much fairer result, but alas, we lost, our chance to put daylight ahead of us at the top of the Premier league had been wasted, we still have a game in hand over City though, and with league matches against Watford, Newcastle and Arsenal still to come, and with City playing Arsenal and Man utd, it was all still to play for, and of course Chelsea, and even Liverpool and Utd could all still have a say. 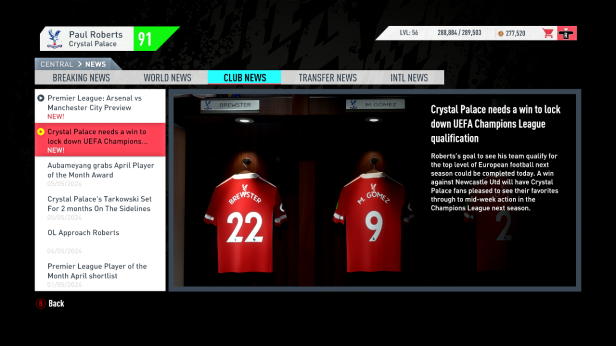 A routine win against Watford followed,  as did wins for Liverpool and City, Newcastle came and made it a tough first half, but ultimately our quality proved out and we picked up a comfortable 2-0 win, with City only managing a draw against Arsenal.
We headed into the final game of the season, this was the situation:

2 points clear at the top, 1 game left to play, City having a slightly better GD, we win and we are Champions, a draw could even be enough if City only drew, or lost, but if they won, they would take the title on GD.
So, to the final day of the season, Arsenal at Selhurst park, all to play for, entering unchartered territory for the club, having never won a top flight league title before, nerves were shredded, tensions high, a buzz filling the stadium, we could NOT slip up here…..

Final whistle bellows, City have been held at old Trafford to a 0-0 draw, we are CHAMPIONS!!!!

Quite an extraordinary season from start to finish.

Max Gomez up front has been a revelation for us this season, signed last pre-season as a direct replacement for prolific 20+ goals-a-season Milovojevic, he has more than lived up to the challenge, finishing the league top scorer with an incredible 31 goals, 1 shy of the all time record.
Brewster, signed from Liverpool for £40mil, also came of age and bagged an equally impressive 25 goals, Adama Traoré, who started slowly, also came into his own second half of the season, chipping in with some vital goals, as did Moses Simon on the other flank.

With Nicolas Pepe from Arsenal, and Vinagre from Wolves set to join in the summer, as well as a few other transfers lined up, next season will be a big push to do well in the UEFA Champions League, really looking forward to playing those atmospheric mid-week matches under the lights, with THAT anthem ringing out.

Obviously the board were delighted with my performance, finishing the season with a 94 Trust rating level, a stark contrast from the 46 rating that saw me narrowly cling to my job this time last season.
My performance didn’t go unnoticed either, as Bayern Munich approached me and said how impressed they were with what I’d achieved at Palace and wanted me to take charge at the Munich Arena, however, I politely declined, I intend to finish this chapter of history with Palace and guide the club through their first ever European adventure before thinking of moving on.

Easily the best, most realistic, enjoyable, intense and rewarding season of pixelated footy I’ve ever experienced in a game, well worth the $2 (£1.67) per month for the FIFER Realism Mods.

As a nod to the carers, doctors, nurses, and everyone at the NHS doing such essential, and caring work in these intrepid times, the club have forgone signing a new sponsorship deal this year and instead chose to adorn next seasons new kits with the NHS logo.

6 thoughts on “The King’s Palace”