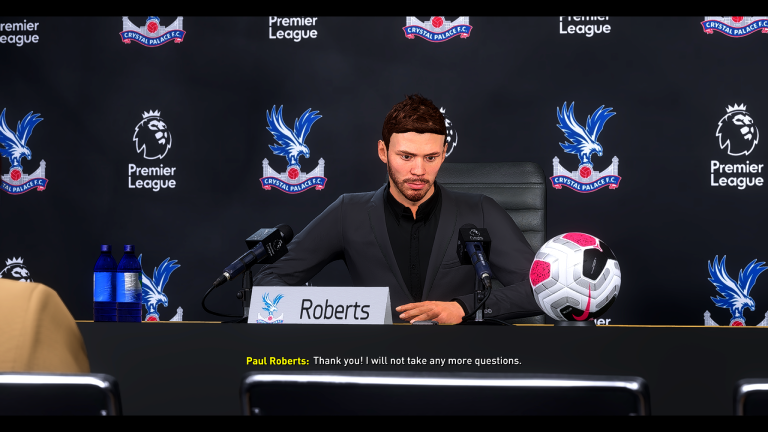 That’s my in-game , not so accurate alter-ego manager attending a press conference probably answering questions on why we put in yet another mediocre performance in our last match.
The Press Conference before and after matches are nice additions, albeit basic in principle, depending on the type of answer you give, your team and player morale and contentment go up or down, happy content players player better, and of course you can fudge this to just answer positively all the time but I just answer straight up, if Ayew was crap in a match, I’ll call it.

Using the FIFER Career Mode Realism Mod and game play mod really increases the difficulty of matches, AI teams are more aggressive, play much more realistically to their abilities, and on Professional difficulty, which I’m currently playing, give a much greater challenge.
The board objectives this season are to finish mid-table and reach the last 16 of the FA Cup, so far on course for both targets to be met, through to the quarter finals of the FA Cup after a 4-1 hammering of Newcastle Utd at the Sports Direct Arena, which was all the more satisfying as the match before that they stuffed us 5-0 at home in the league, and currently hovering at 10th in the table, exactly half way.

Quite clearly goals conceded is an issue, which is actually a nice thing because playing on professional, with the added challenge the mod brings, and players playing true to their real life skills, means there is plenty of life left in the FIFA challenge yet, to move up to World class and beyond, the mod also removes the number of seasons limit so I could potentially play 20+ seasons if I wanted, and had the time.

Above is my usual team selection, pre-season signings Plano and Cantwell are on the bench, I also have Brewster on loan from Liverpool who was injured for this match.
My target for next pre-season is to sign a pacier LMF and a decent CDM as cover for the superb Kouyaté, who has a booming shot in true PES DMF style.

I have team tactics setup for my Attacking, Ultra attacking, Defensive and Ultra defensive styles too, which of course I can switch between on the fly, and a separate team sheet setup for ‘B games’ where I pick most of my young and fringe players and rest the first team players.

I got myself a new controller when I was in ASDA the other night, an XBOX one licensed, but not official, controller that works seamlessly with Windows 10, which has one nice addition, mappable buttons underneath the controller, as shown below. 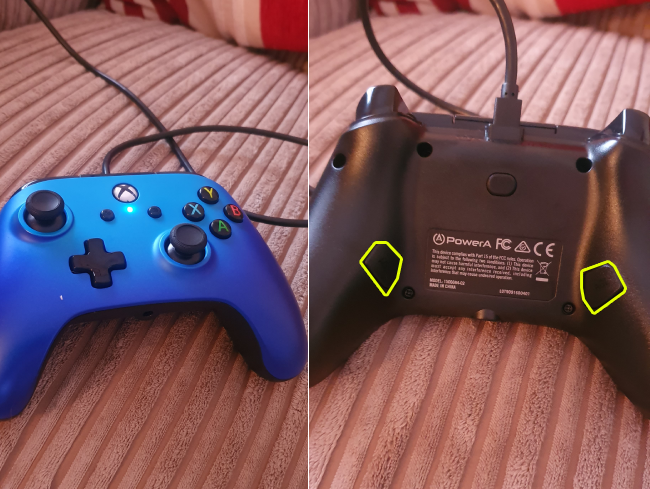 I have mapped each button to L1 and L1, as these underside buttons are in a much more natural position, my fingers automatically rest on them when holding the controller, I can use them much more efficiently than the top mounted bumpers, and as these L1 & R1 buttons are used within FIFA for driven passes, close control dribbling, and together to enforce a daisy cutter shot, its very useful having the mapped buttons available.

To finish off, a small selection of goals from my most recent session, nothing out of this world, just nice goals, the variety of goals you can score in FIFA 20 is superb, and long rangers are definitely in, I could record 20 goals a session but tend to just grab the ones that are contextually satisfying.
You will notice in the clip the goals against Newcastle, there is ticker tape confetti around the edge of the pitch, you usually only see this during pre-season tournament games but I have modded the game to include it for all matches, just think it looks nice and adds extra atmosphere.

You can do this by locating the ‘locale.ini’ file under the ‘Data’ folder within your Origin install directory, then adding the following line to it above the [LOCALE] line:

This will enable pitchside confetti for all matches, and the good thing is that the confetti colour changes to whatever the home teams colours are.

NB: I know there is 2mins 30 secs of dead space after the video ends, I once again forgot to trim the timeline down to the end of the video in HitFilm pro.

7 thoughts on “Not Quite Soaring”