So after seven hugely enjoyable seasons, I decided the time was right for a move away from Palace, in those seven years I have turned the Eagles into Europa, Premier League and League cup winners, installed a solid youth academy, and helped build the business to be healthy and profitable, I felt my time at Selhurst Park had run its course and it was time to look for new adventures.

At the back end of last season I had a nose around at potential job openings, and there were a few interesting choices, I had my heart set on a move to Spain’s LaLiga as most of the stadiums are real and licensed, but to my frustration, all through pre-season, from June right up to 5 games into the new season, there were no available job openings, so I started season 8 as Palace manager, but then mid-September, a few offers came up.

I really fancied a move to a lower to mod table side, such as Real Betis, Espanyol, Sociedad, someone like that, and try to put the ‘Palace stamp’ on them but the offers that came up were Wolfsburg, or Leipzig of the Bundesliga, and Athletico Madrid in Spain.
So with that I applied for the Athletico job, and waited, a further 2 weeks in fact …

So I packed my bags, put my swanky East London penthouse apartment up for sale, and board the London City 12:10 Easyjet flight to Madrid, the Wanda Metropolitano was to be my new home.

I’ve always wanted to try a career mode in another country, just to see if it felt any different from a home turf English campaign, and it did, in fact it took me time to settle in, I inherited a team I knew nothing about, individual players that I will need to learn all about, their traits, key skills, weaknesses etc, also Athelti’s squad is a huge one, I was used to working with the starting 11, 6 subs, and about 5 reserve players at Palace, here we have a squad of around 30 players, many of whome are mid 70’s Ovr to mid 80’s Ovr, so my first few weeks were filled with player interactions from players wanting game time, my first port of call was to scan through each player, and his detailed stats and select a first team and subs that consisted of players with qualities that fit the type of football i want to bring, fast, energetic, dynamic, which also meant transfer and loan listing a fair few players. We need to get the squad size down a bit and trim some wages.

I have stuck with Athelti’s 4-4-2 default formation for now, and built custom formations for each of the defensive and attacking setups, I will assess how the team performs and possibly introduce a variation depending on how things go, but i need the standard setup to use as a baseline for testing for now.

The first few matches at my new club were very testing, the unfamiliarity, new opponents, new players etc, legendary difficulty, FIFERv3 modifier,  we won 1, lost 3 and drew 1 of our first 5 games, The Athleti faithful were wondering if this young Englishman should be in charge at their famous club, but a 1-1 draw in the Madrid derby, followed by a 5-1 beating of Eibar, then a 5-0 drubbing of Las Palmas, and a 3-1 win at the San Siro against AC Milan to secure Champions league KO stage qualification has brought them back around, the early stages of my plan and system starting to show and reap rewards.

I mentioned wondering whether the foreign CM would feel any different, it surely does, there was a charm to playing Las Palmas in the early evening Mediterranean sun, with the dusky orange hue above the stadium, and the commentators stating ‘Welcome to the Canary islands for today’s match’.
The football is also noticeably different in LaLiga, players are more technical, dribble more, the pace of the matches is slower, and more considered as possession football is the standard, compared to the more high tempo, direct approach of the English Premier League.

So the journey has started, well, continued, I’m looking forward to seeing if i can take Athletico on a similar journey to palace, whilst enjoying seeing new stadiums, new players and new broadcast graphics and presentation.

I have placed below a full 2nd half from the UCL group match against Lille, in which we was 2-0 up, only to be pegged back to 2-2, that’s where we join it at half time, just to show how beautiful the game looks graphics wise with the GFXMod installed.

Sitting in a decent position in the league, have the Spanish SuperCopa domestic cup match against Barca coming up, and in the UCL KO stages, first season treble and instant Athleti legendary status? Absolutely no chance but will be fun trying. 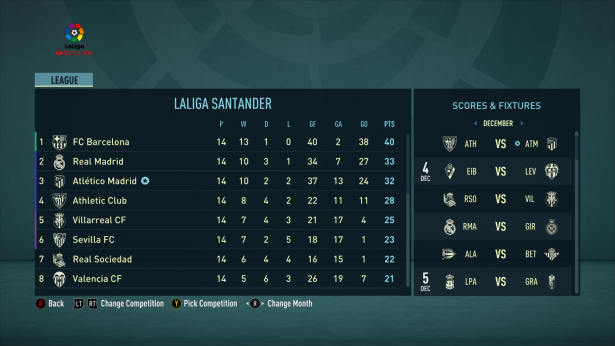 Finally leave you with a short comp of goals scored from my first few matches as Athletico boss.

23 thoughts on “Keeping Athletic-o during lockdown”