Season 6 comes to a climax, it took a little longer than I’d hoped but with the warm weather before this week I spent most days enjoying the sunshine in the garden, a spot of fishing, and of course working from home in between.
With the inevitable delay of 2020’s soccer games due to this Corona virus thingy, there is no reason or need to rush through the seasons, if this years games are put back, then I could happily be playing the PC modded version of FIFA 20 well into 2021.

With that being said, I did finish season 6 and here’s how it played out: Man Utd crowned champions again, for the second successive season, they are the English Real Madrid, a team of Galacticos, with the likes of Ter Stegen, Neymar, Kane, et-al all playing for them, we finished a respectable fourth, sealing UEFA Champions League qualification for next season.

Of course, after the domestic season ends, there are two more matches, the European cup finals, of which we were participating in one of them, the Europa League final.
We are up against Benfica, who won their semi-final 6-0 on aggregate, and this showcase was due to take place in Dortmund, the home of iconic 1950’s style architecture, football and of course beer, so its off to the Westfalenstadion, or Signal Iduna Park as its better known for full unedited highlights of the Europa League final, with added live commentary from myself. Finally, a decent win, and after the misery of missing out two seasons ago, we can add the often elusive Mickey Mouse European cup to the trophy cabinet.

Season 6, 4th in the league, carabao Cup finalists, and Europa League winners, think that can be marked down as a success.
I was greeted with an end of season message from the board literally begging me to sign a contract extension, which I did, so season 7 awaits,  just the job of designing new kits to do before starting, and there’s been one of the numerous EA updates which broke all the mods, so need to install updated GFXMod, FIFER CM Mod, and re-export all my custom adboards and minikits and balls before I can start the new season.

I was toying with the idea of moving up to Legendary difficulty, but after seeing the boards objectives for the upcoming season I’m not so sure: 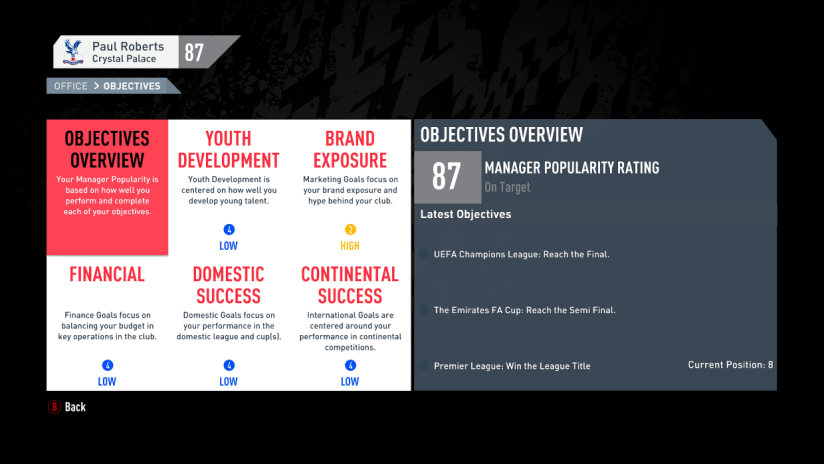 Win the League, Reach the final of the FA Cup and UEFA Champions league, which basically means win those too, no team just wants to get to the final to lose,  well here goes ….

23 thoughts on “Put some beer in my cup”