Season 5 all wrapped up and finished, and what a season
I keep saying this but FIFA 20 matures into a tastier, more rounded, mature wine, with every seasonal sip, the more you bond with players, see your signings come good, see tactical genius decisions play out, nurture those youths, the greater FIFA 20’s hooks sink in.

Building on last seasons Premier League title would be a hard act to follow, we are not a team of galacticos, or multi-dozen-million pound players, most players have been acquired on free transfers, or been targeted as a specific signing to improve key areas, we are still a young talented team on the rise, over-achieving as we go along, we are around 2 years ahead of my expected development curve, so anything less than a concerted effort at defending our title would have been seen as a failure.

In the end though, we just fell short. Man Utd won the title with daylight between them and second, during the run-in, we lost 2 key matches, a hammering away at Arsenal, 4-0, and a frustrating 2-1 defeat at Southampton, coming off the back of a 5-2 aggregate Champions League semi-final win over Barcelona.
Yes, you heard right, Crystal Palace are in the UEFA Champions League final, more on that in a bit.

An overall very good season performance, only 6 defeats all season, only one of those coming at home, a GD of +47, and a Carabao Cup Semi-final defeat to eventual double winners, Man Utd, oh, and that UCL final to come of course.

As Gomez was the standout player last season, with 32 goals, this season he failed to gain much traction, the move up to World Class had exposed his lack of pace, superb finishing but at this level you need pace to buy that critical yard of space in order to be in a position to finish, he never managed that, so lost his place to youth promote, Karl Schinkel, who took his chance to impress and was a mainstay for  a majority of the season, weighing in with an impressive 17 goals.
His strike partner, Brewster, signed a year ago from Liverpool for £42 million, has pace to burn, and a deadly finish to match. 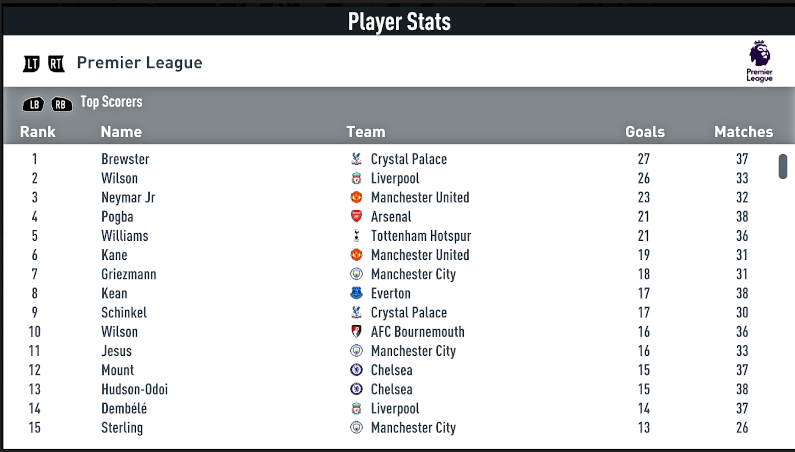 27 goals for the season, and a further 8 in the UCL, a great season for young Brewster, who is still only 24 and has his best years ahead of him.

Now, on to the pinnacle of the season, the climax, and none other than the final of the greatest club competition on the planet, the Champions League final, where we would face Juventus, at the Ajax Arena.

Juventus, UCL Final, World Class level, this will be one tough match, will we finish the season on a high and be crowned kings of Europe, or will we falter and have to settle for the experience and a consolation prize of Europa League football next season?

Extended highlights of the UCL final are presented below.

22 thoughts on “The summit gave us frostbite”