It’s that time of the season, March 2024 in my Career mode world to be precise, approaching the 30th game mark, the business end, where teams fight to avoid relegation, or fight for titles and trophies, luckily enough, we are involved in the latter of the two.

This is the league table as it stands after 29 games:

Very tight up there, all the way down to 5th place could still yet have a say with 9 or 10 games to go, I played table topping Chelsea in my most recent session, it ended 1-1, after being a goal down at the Bridge, great game, cancelling each other out all over the pitch, the finest margins counting, end to end stuff and one of those draws that as a neutral, you would have thoroughly enjoyed watching.
I also recorded my biggest win on World class level, a 7-0 hammering of Huddersfield on their own turf, they were white dog shit.

Every match continues to be a solid 9.5/10 experience, tense tight matches, lots at stake, and extremely enjoyable, maturing season after season like a vintage 1983 Chablis, Cheers!

I did some business in the January transfer window to bring a few new faces in to cover positions where players had left, I let LM Moses Simon go after some disappointing performances this season, Adama Traoré has shifted out to the left now to cover, and Wylan Cyprien, my talismanic CDM also left, he was 32 and wanted a decent payday before retirement, and moved to Besiktas.
The players scouted are for the summer, however I did sign a CB from Liverpool, Ruben Dias, when we played them he was a rock, but £43 million plus our CB Bruno Viana sealed the deal, 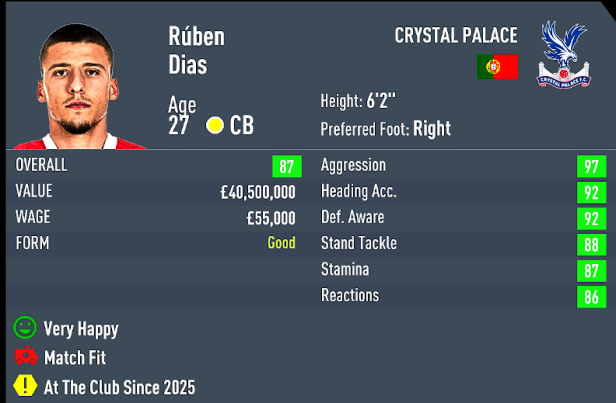 After finishing group runners up in our Champions League group, we were drawn against Villareal in the last 16, a solid 3-0 win at home followed by a 1-0 defeat in the Estadio ceramic, saw us through on aggregate, the noise in that Spanish stadium with the flares and drums, insane!!! Villareal are 3rd in la Liga behind Real Madrid and Barca, so a great victory, and we eagerly awaited the Quarter final draw, only to be pitted against Barcelona, no Camp Nou Stadium in FIFA unfortunately but will still be a great occasion.

A shock exit in the FA cup 3rd round to derby, and a Semi final 2 legged defeat at the hands of Man Utd in the carabao cup means we are out of both domestic cups, so just the poor mans double of the Premier League and UEFA Champions League to play for, not expecting to win either, but we will give it a damn good go.

Finally a little 2 and a half minute compilation of a few goals, including a couple of youth player come star in the making, Karl Schinkel, who continues to perform way above his 70 OVR rating, and bang the goals in alongside Brewster.

4 thoughts on “The Business End”