That’s kind of how it feels at the moment, the season is done, all the hard work has been finished, its that almost pointless void at the end of the season where clubs play half-baked friendlies and go on globe trotting tours around the world playing exhibition matches as a way of improving fitness and as a marketing campaign, and so it is with my gaming habits.

You may recall before I went on holiday mid June, I was about to lead England into the Euro Championships, as an extension of my career mode, well I did, and it’s really not worth reporting on.

Group B saw us pitched with Poland, Germany and Romania, I lost the first 2 games both 1-0, and beat Germany 1-0 in the final group match to finish bottom of the group with just 3 points, and therefore eliminated at the first hurdle.
Whether it was the 3 week break between playing, or the jump up to Legendary difficulty that I made a few games from the end of the domestic season that caused such a dismal performance I don’t know, but that was that, and with it, my career mode in FIFA 19 came to a conclusion.

11 seasons, spanning almost 9 months, picking up 13 trophies, including back to back Premier league titles, FA Cup wins, League cup wins, and the Champions league, taking Nottingham forest from a mid table Championship team back to the pinnacle of European football, all in all It was a thoroughly enjoyable career and FIFA 19 has given me some of my most memorable footy gaming moments to date.

I mini-pseudo FIFA 19 review below, purely coming from a career mode focused opinion. 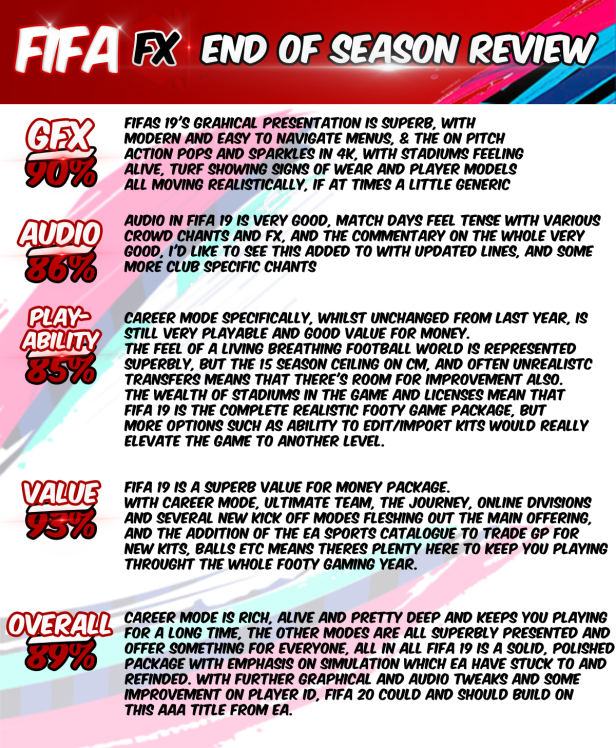 Now that the summer months are here, and its generally warmer and lighter, I don’t feel as much appeal to play games in the evenings, so gaming has been sporadic, but am currently dipping in and out of a few games, playing FIFA 19 Online Divisions, World Snooker 19, and soon to start Detroit:Become human, David Cage/Quantic Dreams latest story based offering along the lines of Heavy Rain from a few years back which I loved.

Here is a nice little goal I scored in an online divisions match against yet another player who was being a total bellend:

Been passing an eye over the E3 games news, specifically Cyberpunk 2077, due to release in 2020, but also of course the PES 20, or eFootball PES 2020 as its now affectionately named, and some of the new master league additions and changes could be decent, but will purely rely on Konami implementing these new features and mechanics properly, which they so often fail to do, so will reserve judgement for the demo at the end of July.
The new camera angle does look very nice though, and I do miss the ability to design kits and chop and change them with sponsors as the season goes by, and of course with PES 20 releasing  a few weeks before FIFA 20 (some updates on FIFA 20 new additions here: FIFA 20 New additions), I could well be tempted to start PES 20 first again this year, but it will have to meet expectations for it to last, no messing around wasting time on a half-assed game again this year.

I have already decided that either way, I shall be taking Championship newcomers Luton Town on a career mode journey this year, up the hatters!!!

As I mentioned Snooker 19 earlier, I thought I’d leave this here, a nice little safety shot I played in a  qualification match for the Welsh Open:

Over the next few weeks leading up to the release of the new footy games I’ll be posting random gaming snippets, thoughts and musings.

18 thoughts on “End of Season Tour”