Firstly, apologies for the cancelled Tuesday post, I was away all weekend, which was a last-minute decision, and as such, didn’t have any gaming time all weekend, therefore no material to post, busy life commitments also meant I didn’t have any pre-prepared posts either.

Anyway, on to all things FIFA career mode, and season 8 is culminating in to a very climactic finish.

You’ll remember last post I mentioned that we lost 2-0 to Juventus at Home in our first leg of the Europa League quarter-final, well the second leg at Turin didn’t offer any respite, as we succumbed to a 1-0 defeat to go out 3-0 on aggregate.
There was no help given as Juve were a well organised, good footballing side with great players who individually can win a game, and that was the case with Dybala getting in behind our defense to finish precisely from a tight angle.
I’m never sure if the pre-match press conferences actually do anything, if the route you take with them actually has any impact on the match at all, but I went for the ‘Unnerve Juventus’ approach, which seemed to just make them play better.

Despite crashing out, the atmosphere in Turn was incredible and very realistic, closely replicating that of a big European night away from home.
The Juventus banners draped all across the stadium, the constant loud echo’s of ‘Juve, Juve’ from the Ultras, and the commentary from Derek Rae and Lee Dixon, it really did add a superb atmospheric immersion to the game.

At least with being out of Europe, the fixture congestion would ease up slightly, playing in the Carabao Cup, FA Cup, fighting for European places in the league and playing in the Europa league final stages meant that player fatigue was setting in quite heavily, I was regularly playing matches fielding several players who had 50% or less stamina, and as such, were next to useless by half time.
You may say ‘get a bigger squad’ and in theory this is the answer, but in practice, you then get disharmony from players who were promised a prominent role in the team, and when they are rested they complain, which affects morale, form and team cohesion.

The fatigue seems to be affecting Foden, my first choice AMF, who has been injured several times this season, he’s becoming unreliable. I think I’m going to have to recruit for that position in the summer, bring in some reliable back up.

After winning the Carabao cup and FA Cup last season, we made it through to the final of the Carabao cup again, this time facing Spurs, we were outplayed and unable to compete really with the injuries and fatigue, having to play youth players out of position to make up a fit squad, we lost 3-1 in a pretty straightforward match and relinquished the trophy. 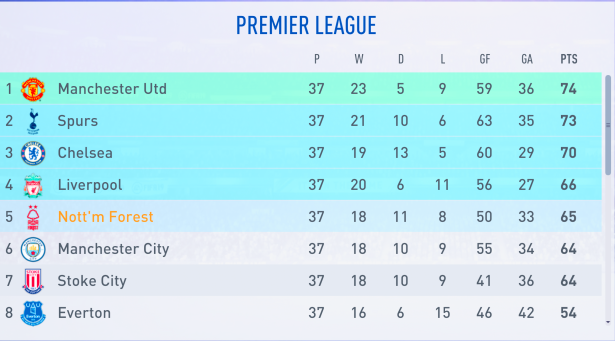 Our league positioning was sitting in 5th just outside the UCL qualification places, with literally only 3 points separating 7th place and 4th place, with only a few games to go, we picked up a draw against Southampton in a game we should have won, after coming from 1-0 down to lead 2-1, but failed to defend a cross in the last-minute of the game and they equalized from a header for 2-2, another 2 valuable points dropped.
A comfortable 2-0  win vs West Ham followed, and a 1-0 win against Fulham which kept us in with a shout with only one match left to play.

We are chasing Liverpool who are 4th, only a win on the final day and a result going our way will see us qualify for the Champions league.

On to the FA Cup, we faced a tricky semi-final against Leicester, which proved to be a tight game, not a classic by any means, cue the returning from injury Dennis, who popped up in the 45th min and nodded home a neat finish after a cheeky Rabona cross from Kluivert, to send us in 1-0 at half time.

We saw out the second half to book our place in a second successive FA Cup final.

Our opponents, yes Liverpool, this could be a psychological battle not only for the FA Cup but for that final UCL place.

The match started tensely, both teams knocking the ball about well and creating half chances, but neither team really threatening until the 33rd minute, when I foolishly collected a back pass with my GK and went to launch a quick counter attack by throwing the ball to my CB on the edge of the box, but failed the check the radar and see the Liverpool forward Cutrone, lurking, he intercepted the pass and had an open net tap in from 10 yards, to make it 1-0 to them.

The following video shows the rest of the goals in condensed form, in what proved to be a humdinger of a cup final.

After levelling at 1-1, we then went 2-1 up, before Liverpool equalized late one, the game looked destined for extra time, until a nice team move saw Youth promotee turn first teamer, Shaw, latch on and finish competently to take the 3-2 win and lift the FA Cup for the second year running.

So season 8 has seen us as beaten Carabao Cup finalists, FA Cup winners, reach the last 8 of the Europa League, and qualify for Europe next season via the FA Cup, if we can grab that last UCL spot, then it can surely be considered a successful season.

8 thoughts on “All to play for”