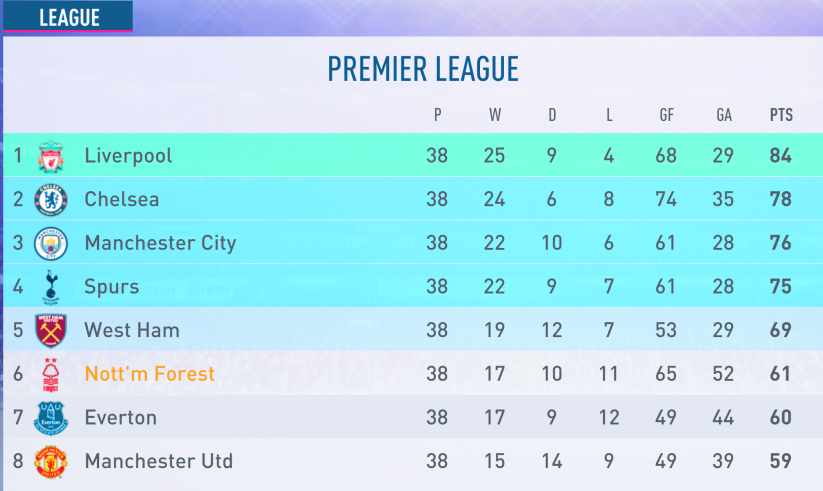 Lemons & Limes, leave a bitter sour taste in your mouth, and that’s what the end of season 6 left me with.
Firstly, a top 6 finish, Carabao cup semi final and FA Cup last 16 should be, and is, a satisfactory season, however I wanted European qualification, and we didn’t achieve it, our last 8 matches of the season only yielded one solitary win, 4 draws and 3 defeats, to slip down to sixth with no chance of achieving fifth, and that final European slot.

The last 8 matches were one of those ‘spells. the game likes to throw up where it just fucks you right over, any which way it can. I had matches where I hit the post 3 times a match, where my players were struck with an inability to pass 5 yards in the final third, where every single deflection, bobble, physical encounter fell the CPU’s way, and I was fouled lots and was given nothing, and the CPU just parked 10 men in the box.

During the end of season run-in, I played West Ham, who were a place above us, a 6 pointer, and we played out a boring 0-0 draw, I just could not break them down, or get through their Mourinho style defensive brick wall of 10 players in a tightly confined penalty box, with both Dennis and Belotti fighting for the golden boot, this was not a showcase for their goalscoring prowess.

Next up was bottom feeders Swansea, and yet again I hit the post twice from almost guaranteed scoring positions, then I was fouled on the edge of my own box, and given nothing yet again, and Swansea scored from it.

Now I know I should not have thrown that ball to a defender on the edge of my box, but it was still a certain foul and a FK should have been given, it wasn’t, I lost by that single goal, and slipped beyond being able to qualify for Europe because of it.

Dennis bagged 2 more goals in the remaining 2 games and finished as League top scorer and claimed the golden boot, a great season for him and happy to have tied him down to a new 4 year contract.

I finished the season with a managerial trust rating of 72, and was told by the board that it was a satisfactory season, and was offered another year on my contract, and given a £92 million transfer kitty for next season.
Some job opportunities came up, West Ham, Man Utd, Spurs, Man City, Marseille, Paris SG and Stoke City, all as potential openings, but in the end I decided not to put my name in the hat for any of these jobs and stick with Forest, I want to win something with the club I have spent 6 seasons building.

I’ll finish with a small compilation of goals scored during the baron run-in spell.

So, season 7 awaits, and silverware is an essential must, no other option.
I’ve also added a forum to the blog now, with sections for all sorts of things, so feel free to drop in, post, use the chat box etc.