Top of the EFL Championship heading into January with a 9 point lead over second place, I fully expect to win the title this season, barring a complete disaster we will be returning to the Premier League.
It’s all or nothing because I have put all my eggs into one basket with the expectation of Premier League football, and finances, next season.

If my last promotion season was anything to go by I should get around the £50 million mark in transfer funds for winning promotion, maybe a bit more as Champions, and I will need it.
Last time round we just wasn’t good enough to compete with the big teams in the top flight, not enough strength in-depth, and it showed, finishing bottom, I’m desperate this time to avoid relegation and build season upon season and turn Forest into a permanent Premier League fixture,  in order to do that I will need more, and better players, which leads me on to some big news.

I have a very thread-bare squad right now, with the starting 11, 6 subs and 2 reserves.
A few players left on loan, a couple returned to their parent clubs after finishing their loans, but I’m confident I have enough within the squad to see out this season and finish as Champions, but as I mentioned earlier, to compete in the Premier League next year we need good quality, m first team ready players, and I have managed to secure the services of three very capable players to help me compete with the top teams.

The January transfer window has just opened, this is prime time for scouring players who are within the last 6 months of their contracts, if you can secure a pre-contract agreement then you can pick up some massive bargains as there are no transfer fees to pay, you just negotiate With the player, so you can afford to offer them lucrative deals, and I feel with the players I have secured above they will definitely add quality to my squad for next season. 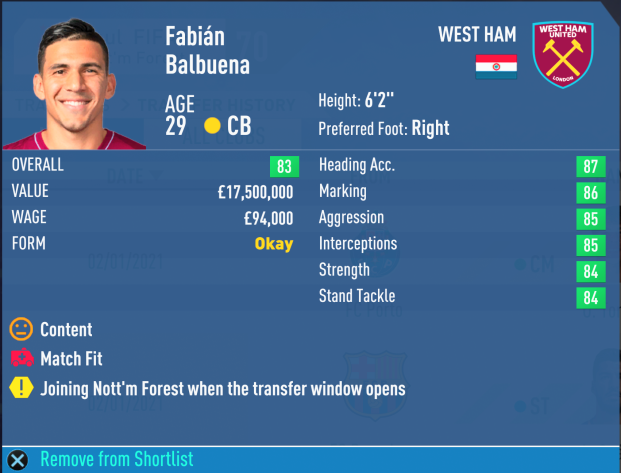 All three are superb players, who’d not renew contracts with their clubs so were all picked up on a free, Torres was signed from Porto on a 3 year deal for a £1.2mil signing on fee and £35k wages, Balbuena from West Ham for a 500k signing on fee and £65k wages, and finally the infamous but superb Luis Suarez from Barcelona for a £2.5 million signing on fee and £100k wages, only on a one year deal but if its enough firepower to keep us in the Premier League then it will be money well spent.

If I’d had signed those players from the clubs, then I would have had to pay £140 million upwards easily, so pre-contract deals are a great way to sign quality for much less cost, obviously this calibre of player only agree to join on the promise of playing in the top league, I would not have been able to sign them as a mid-table Championship club, of course there is a risk that I still may not be promoted, but its unlikely, all or nothing.

I continue to have superb session after superb session on FIFA 19, still as immersed and engrossed in my ever-evolving career mode story as I was on day one, player individuality is there in buckets, matches have a realistic feel, and pace to them with teams playing differently depending on the situation, and coupled with the excellent presentation and match-day atmosphere, every game feels important.

I’m also into the 4th round of the FA Cup after beating Coventry City 2-0 at home, so the league title and a good cup run would surely see me meet board objectives.

A short video clip to finish, firstly showing an amusing moment in a match, loving the attention to detail, then a few goals scored in recent league matches, including a nice goal from Albrighton in the Snow.

32 thoughts on “All or Nothing”