After 18 games we currently sit 8th in the table, only 7pts off top spot. My objective for the season is to win automatic promotion, that’s a top two finish, the board expect a lot .

Playing on World class is tough, CPU teams close you down quickly, drop back and pack the defence and generally restrict space for you to play in, patience is key, if you can manage to pass sideways, backwards, trigger runs at the right time, and play the right ball, you will unlock defences, of course you need the players to make this happen.

Results have picked up in the last 5 games, with 2 wins, 2 draws and a defeat, Villa are up next and is already a 6 pointer in pushing for those playoff places.

Here is my current squad, starting eleven and subs, in the screenshots shown I have Brewster in the team at CF, he regularly interchanges With Grabban, Brewster is in there to gain match experience and develop, he’s on loan from Liverpool, this is what Klopp would want for him. 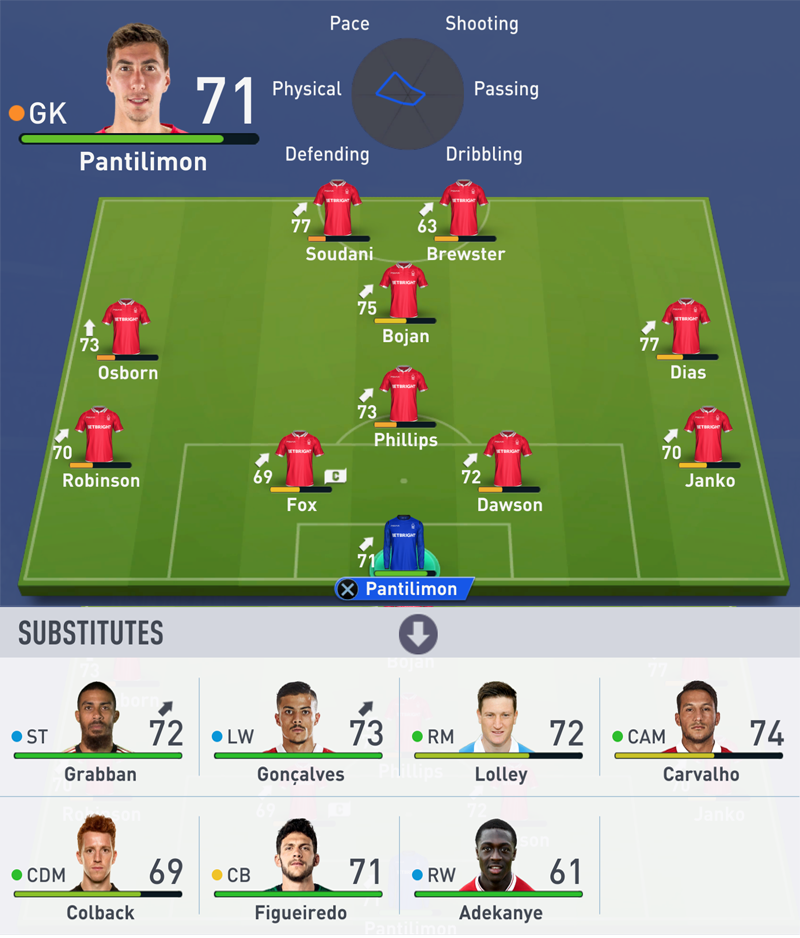 As you can see, fatigue plays a much bigger part in this years game, in previous FIFAs, as in PES, players were largely able to run around for the full 90 mins and be fine, and be ready to go on full stamina for the next match, not so much this year.
Players do tire during matches, to the point of needing to be subbed, visible fatigue is evident with their touches, runs and shooting as well as passing. Squad management is a must.

Sat at the heart of that midfield is Bojan, signed pre-season from Stoke for £5.2 million.
He took a few games to find his feet but since has been superb, he is the creative heart of the team, most moves go through him and he chips in with a few goals too, already on 6 for the season, with as many assists.
His passing and vision is superb, so with the patient build-ups he’s able to put a foot on the ball and pick out that slicing pass, he also seems to be settling in well at the club.

I have also setup two youth scouts, and recommendations are filtering through, its tough to gauge just how good a youth player can be at 15 or 16 years old, as even the most advanced scouting report only gives a broad range for overall rating and potential, but with another of my objectives being to sign a youth player to a professional contract in each of the 4 positions (GK/Def/Mid/Att) I will have to take a punt,  and have just signed 16yr old attacking player, Jobson, to a deal.

The video below shows a good move start in midfield with Bojan, he’s also involved in the pass and move to build up the goal, then finally doing what he does best by getting behind the back four for the opportunity to score

This next video shows a great counter-attacking move to bag an equaliser away to Blackburn, I like the way the winger, Dias, steadies himself before planting it in the corner

Lastly, something you don’t see in PES, a good clean powerful header on goal

64 thoughts on “A Forest Bird Never Wants a Cage”